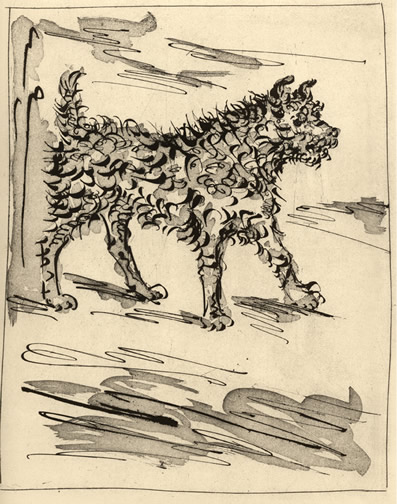 This print is one of 31 different animal images created by Picasso between 1936 and 1942.  The original copper plates from which the etchings were created used a technique called sugarlift and drypoint.  The etchings were intended to illustrate the Natural History book of  Buffon (Histoire Naturelle), originally published between 1749 and 1788.  Georges-Louis Leclerc Comte de Buffon was a natural history scientist who lived from 1707-1788.   The 36 volumes of  Buffon classified the animal species based on patterns and details observed as an autonomous science free of theological influences.  His empirical methods contributed significantly to novel ideas about the distribution of plants and animals around the globe.  Enjoy this summary on Buffon: http://www.strangescience.net/buffon.htm. Buffon and Picasso were similar in that they did not conform to traditional ways of thinking.  They questioned and pursued their own directions without regard to traditions and the practices and thoughts of others. Picasso's publisher, Ambroise Vollard, proposed to Picasso his creating the illustrations for new book illustrating Buffon's volumes but Vollard died in 1939 before the book was completed.  Picasso's printer, Roger Lacourière, printed Picasso-drawn plates in 1941-42.  It was Lacourière who taught Picasso the technique of adding aquatint to the sugar which when added to the etching plate created tonal qualities of varying grays.  Vollard's associate, Martin Fabiani, undertook to finish the project and is considered its publisher.  Twenty-one of the 31 plates are accompanied by text of the Buffon natural history. Of the 31 animal images created by Picasso, Saper Galleries has available 10 of the etchings.  Please contact us to see images of the horse, ram, deer, lion, monkey, vulture, bee, lizard, and frog.

Steel facing is a modern technique whereby the soft copper plate into which the image is etched receives a thin coat of steel via electroplating in order to harden its surface. In this way an edition can be printed from beginning to end without degradation of image quality, unlike Rembrandt etchings, for example, whose bare copper plates wore down from the pressure of the press over the course of printing an edition. This resulted in a visible softening of lines, as well as a diminishing of subtle contrasts and tonal depth in examples from late in a print run. Although steel facing allows for consistent quality throughout an edition and is thus an improvement over a bare copper plate, the process necessarily reduces textural delicacy and tonal depth to some degree. Therefore, proofs before steel facing are the ultimate vehicles for displaying both the full expressive capacity of the etching process and in so doing that of the artist's hand.

Sugar aquatint or lift-ground etching was mastered by Picasso in 1936.  The etching technique preserves the artist's brushwork and permits broad areas of color instead of just thin, dry lines.

Picasso would draw directly on the metal plate with a black watery ink thickened by the addition of dissolved sugar and gum Arabic.  The dried drawing is then covered with an acid-resistant varnish or etching ground and immersed in warm water.  This penetrates the ground and dissolves the drawing material.  The plate is lightly rubbed so that the drawing as well as the varnish on top of it "lift off",  leaving the bare plate.  The protecting vanish will still stick to the plate where the plate has not previously been treated with the ink and sugar mixture.

With copper plates the direct action of the acid is not sufficient and is too smooth, leaving gray tones where the acid has been bitten directly into the plate. To achieve textures like brushstrokes Picasso would lay down an aquatint ground on the lifted design.  This resin ground now covers the bare metal of the open lines or brush stokes lifted from the first ground and provides well defined textures and tones.  When preparing the artwork on the plate the artist would work spontaneously with the pen or brush.  Sugar-lift etchings are often combined with aquatint.  Picasso liked the medium (even though it was difficult to control) because of the variety of textures it would produce.

With an aquatint a porous ground of acid-resistant particles is used to cover areas of the metal plate.  Heat is then used to fuse the particles to the plate.  This allows the acid to bite away a fine grid of small dots into theh plate as when the plate is dipped in an acid bath, the particles prevent bits of the surface from being eaten away.  The resulting dot texture creates an illusion of tonal range that Picasso favored.  With drypoint, a steel needle is used on a metal plate leaving the burr.  The printed lines show a characteristic bleeding effect.

This etching used the combined media of sugarlift aquatint and drypoint.