Saper Galleries had represented the Herman Miller classic-design furniture line for more than 15 years.  That long-term relationship ended June 15, 2002 when Herman Miller discontinued working with its network of bricks-and-mortar retailers as it refocused the company's direction. 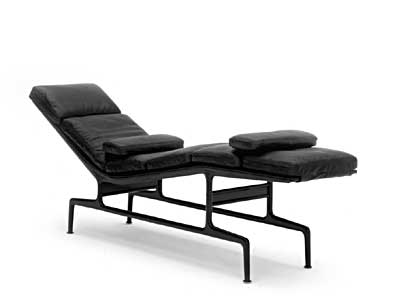 Making movies is a grueling business.  So hard working Academy Award-winning film director Billy Wilder occasionally needed a place to nap between takes. His friends, Charles and Ray Eames, were sympathetic.  So much so that they designed the perfect place for a quick snooze.  It's a beautiful place, too.  Sweet dreams.     76 1/2" long and 18" wide.   Black leather on eggplant frame.   $5,777 - $1,157 courtesy = $4,620.

Charles and Ray Eames designed the Eames chaise for director and good friend Billy Wilder. Its beautifully sculpted form provides the perfect respite for a quick snooze. Its compact size allows it to fit comfortably in a study or den—or even the hallway between them.

In 1955, Wilder planted the seed for the development of the chaise.  He mentioned to Charles and Ray that he had discovered a suitable spot for a short, restorative afternoon nap.  It was a foot-wide plank slung between two sawhorses in a Nova Scotia lighthouse, where Wilder was filming The Spirit of St. Louis.  Remembering that story later, the Eameses went to work on the chaise, introduced in 1968, and produced by Herman Miller ever since.

With a grand sense of adventure, Charles and Ray Eames turned their curiosity and boundless enthusiasm into creations that established them as a truly great husband-and-wife design team.  Their unique synergy led to a whole new look in furniture. Lean and modern.  Playful and functional.  Sleek, sophisticated, and beautifully simple.  That was—and is—the "Eames look."

Saper Galleries....where excellence is the standard!