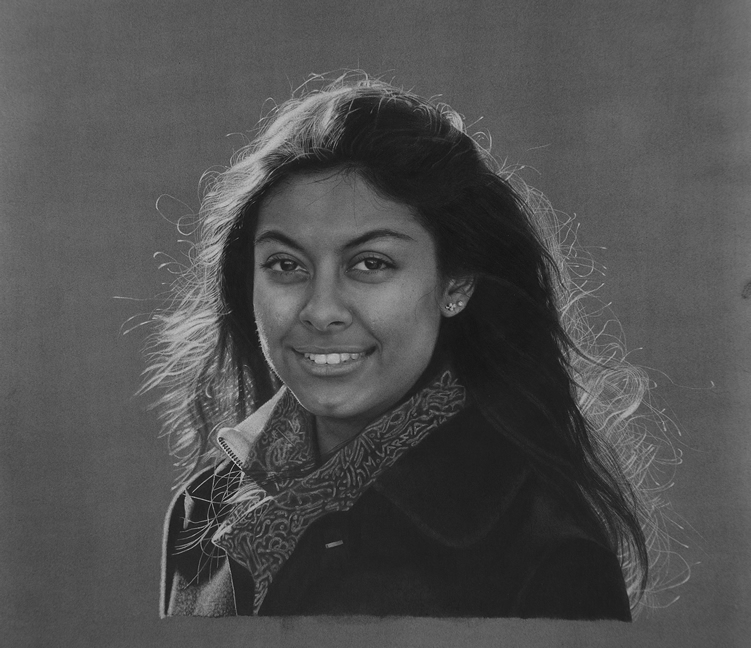 Portrait This graphite pencil drawing illustrates the amazing quality of Jay Varma's artistic talent.  No one does better.
If you would like to have a portrait drawn of yourself or a loved one, contact us now for more detail! 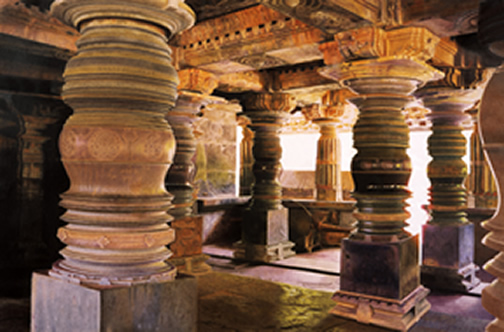 
Based on one of the temples built by the Hoysala Dynasty, which ruled Karnataka (formerly Mysore) from the eleventh to the mid fourteenth century, "Pillars Within" was conceived from an actual temple.  According to certain inscriptions, the name "Hoysala" is derived from a story where an ascetic was threatened by a tiger during his meditation and he uttered the words "Hoy, Sala!" (Strike, Sala!)  Whereupon the legendary founder of the dynasty slew the tiger.  The emblem of the Hoysala's, a man killing a tiger is found at most of these temples.  At its zenith the Hoysala Empire is supposed to have stretched the length and breadth of Southern India. Situated at Sagar, in Shimoga, northern Karnataka, amidst dense forests, this long forgotten temple was in total disrepair and completely isolated.  Miles away from any habitation, it seemed to be one of the lesser temples and perhaps because of this, it was neglected.  In spite of all this it still had about it an aura of ancient majesty, the imposing pillars echoing the mastery of long gone architects and craftsmen.  That and the light that glowed from all around was what drew the artist to it in the first place. 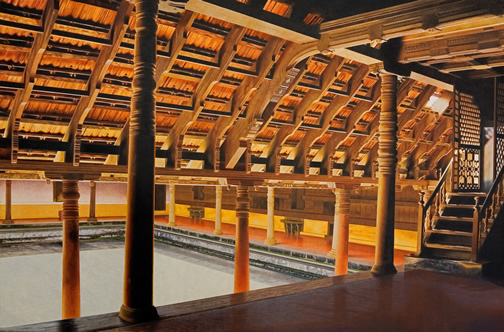 Swarnathe Mana (The Inner Courtyard) Giclee based on original colored pencil drawing, 18 x 27 1/2" Signed by the artist from an edition limited to 150 $325
The original drawing from which this giclee was based was selected for the
15th Annual International Exhibition of the Colored Pencil Association of America (in 2007).  And that is exciting!


The literal translation reads “Golden Manse” and depicts an ancient traditional Brahmin home, typical of Kerala, a southern Indian state.
Intricate carvings adorn massive rosewood beams and pillars, surrounding an open courtyard, which is positioned at the center or midpoint of the construction.  There can be up to four such courtyards in a single home.  A precious few of these old homes remain today.

Jay Varma is a gifted coloured pencil artist who combines a dramatic sense of colour with extraordinary detail.  His artistic style combines an impeccable realism with a unique and subtly rendered application of bold and brilliant colour with particular attention to light.   Essentially a self-taught artist, Mr. Varma continues a rich history of artistic skill and reputation through four generations of his family in India.  His great grandfather, the master oil painter Raja Ravi Varma is still one of the most highly regarded artists in India.   His grandfather, Kerala Varma, like Jay, created his reputation in charcoal and pencil.  His mother, Rukmini Varma, paints in oil, her work hanging in major collections throughout the world. Mr. Varma's skill won him the prestigious Sanford award for Exceptional Merit at the Eighth International Colored Pencil Competition held in Birmingham, Michigan, in 2000.  His work has been featured in the Artist's Magazine and the International Artist, among other prominent publications.  Generally regarded as one of the most demanding of all artistic mediums, coloured pencil surprises and delights the audience with its vast range of subtlety and mood.  Mr. Varma's remarkable talent offers a welcoming invitation to be a part of his rich and magnificent world and has received recognition throughout the United States.

Saper Galleries is proud to introduce the colored pencil drawings of Jay Varma to the world.  Enjoy!
Home       About       Inventory       Contact       Testimonials       Chat Now
Saper Galleries....where excellence is the standard!